If you’re heading into the bush on the east coast of Australia, it’s only a matter of time until you encounter one of these little buggers. It only took a few days for the kids playing around the bush at Lakes Entrance, Victoria to pick one up and get embedded in Lachlan’s neck. We noticed it swimming 10 days later at the Lightning Ridge Thermal Springs.
Michelle also had one embedded in her on the West Coast of Australia. If you spend time a considerable time camping in Australia, be prepared to get paid a visit by one of these tiny bugs. 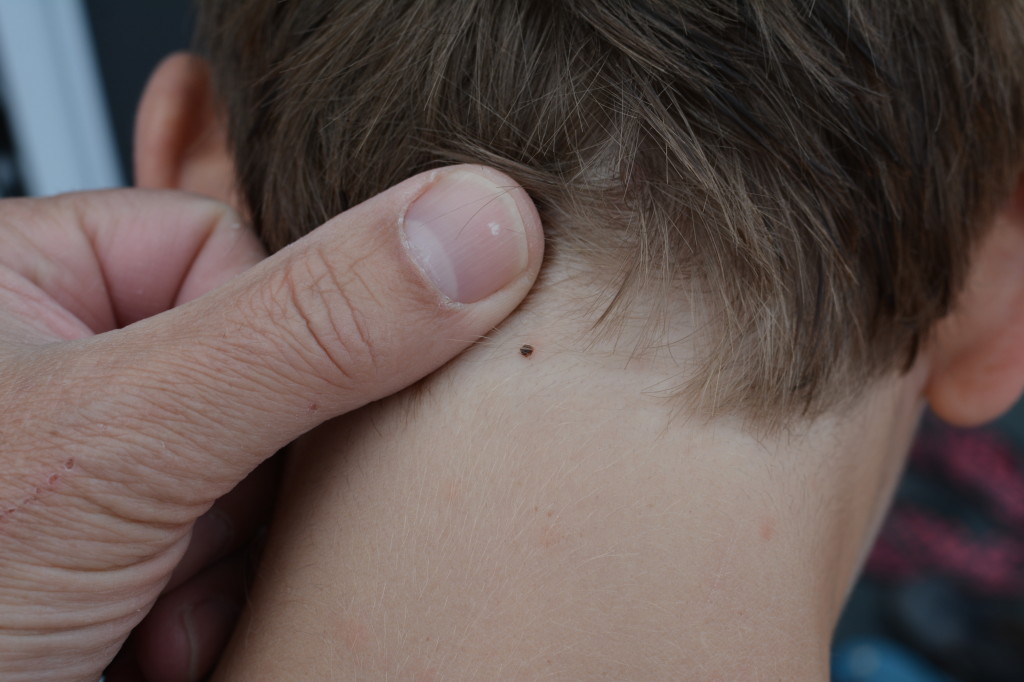 To avoid ticks, many people set up their campsites away from overhanging trees and other vegetation. While this is still good practice, it’s actually a myth that this will keep you tick free; it actually helps against leech attack.
Regardless of how you acquire these parasites, ticks are one of the parasites it pays to be aware of while travelling the Australian bush. 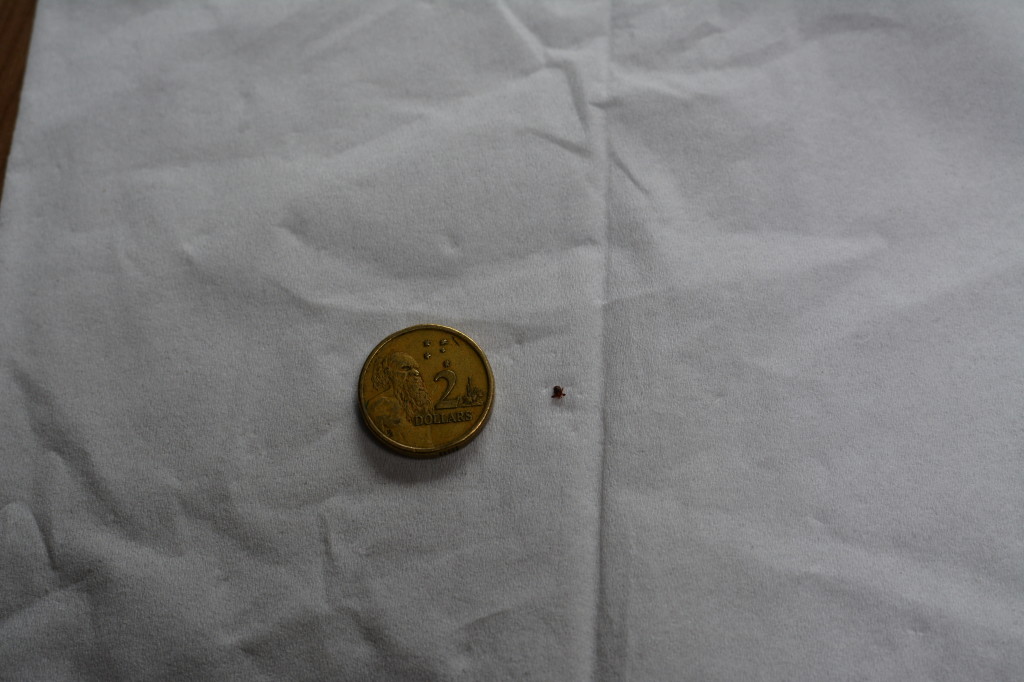 There is a number of tick species which live in Australia, but the one which you need to be aware of is the Paralysis tick.
Ticks are from the Arachnid family, which also includes spiders, scorpions and mites. There are around 75 known species of ticks, and the Paralysis tick falls into the hard-bodied group, which have long, extended mouth parts with backwards-facing teeth. Like the common leech, the Paralysis tick is found in a 30 km wide band along the eastern coast of Australia, in the wettest and coolest forested areas. It cannot survive on excessively hot, dry conditions.
The Paralysis tick is a few millimetres in size, flat and marked prior to feeding. It can bury itself deep in the skin, and can go unseen for days before being found. Once it has started feeding, it becomes a pale grey colour, engorged and ovular in shape, between 5 and 10 mm in length.
In areas suited to the tick, they can be present throughout the year, their average life-cycle being only 12 months. Ticks require a meal of blood in order to get the energy necessary to moult and continue their lifecycle.

Lifecycle of a Tick

Although both male and female ticks eat blood, typically it’s only the females that bite humans. This is because the male is much smaller – usually they feed off the female ticks, even as the females are feeding off a larger host.
The female tick will lay up to 3,000 eggs before dying. All the way through their lifecycle, ticks will climb to the top of vegetation, waving their legs through the air hoping to snare onto a passing animal. This is why only a few of those 3,000 eggs will grow to reproduce – waiting for your prey to come to you is a precarious method of survival.

If you have been out camping and are beginning to feel ill, then you need to check yourself for ticks. Children are especially prone to tick bites, because of how they run around through bushes and trees. If you find one, still see a doctor, because the venom has already been injected. Symptoms include: headache, rash, flu or fever-like symptoms, swollen lymph nodes, weak limbs and paralysis of the face.
Ticks usually climb vegetation only as high as your knees. The reason they are often found around the head is because they prefer hairy areas. There are other hairy, dark places on your body however, so make sure to check armpits and groin areas. 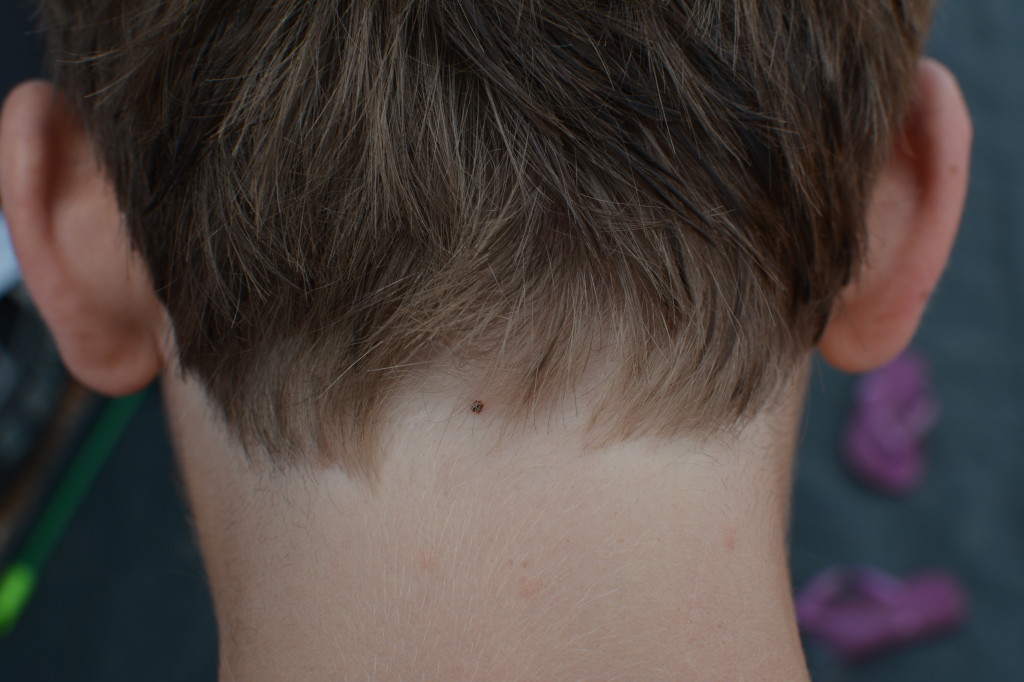 When they find a preferred feeding area, they will administer an anaesthetic before pushing their head into the skin and locking it there with their backwards-facing teeth. Some species also secrete a glue to stick themselves to the skin, which is always handy when beginning a feeding frenzy which can last up to 10 days.
There are not many ways, other than avoiding the bush, that people can outwit ticks. Avoid low vegetation, and minimise any access to your body. However, because ticks can squeeze through areas as small as the eyelets on your shoes, it’s very hard to do this. 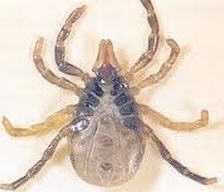 Insect repellants that are advertised as anti-leech/tick can help, but they must be applied to the areas that ticks would attack – not exposed areas, as with mosquito repellant.
No matter what precautions are taken, it’s always a good idea to do a full body check each night before going to bed. Showers are a good opportunity to do this.

If you find a tick, the best method of removal is to, using tweezers from your first aid kit, come in horizontally and grasp the head of the tick while exerting a steady upward pressure. Do not use home remedies such as fire or detergent on the tick, because these will cause it to spew venom into the wound. This is the last thing you want, and the tweezers method is the only one that is endorsed by doctors and other medical practitioners. There is some skill to successful extraction, so if you’re not confident or squeamish see a doctor.
There’s no need to panic in the case of a tick bite. It may not be a Paralysis tick, and even if so most tick bites turn out to be harmless. This is, however, no reason to become complacent; tick bites can spread a number of harmful diseases such as typhus, paralysis and severe allergic reaction.
Although the Paraysis tick is the most widely known tick threat, the most dangerous risk is allergic reaction – which can happen to all tick bites, not only a particular species. Allergic reactions can vary from itchiness and swelling to life-threatening anaphylactic shock. Allergic reactions can happen in people with no history of allergies and become worse after each subsequent bite. For people with known tick allergies, it pays to stay away from tick-infested areas, because medical attention for anaphylaxis is scarce in the depths of the bush.
In the end, the only thing that can be done to avoid ticks is to carefully search yourself for them at the end of each day, so make sure to give yourself a good once over at the end of each day of camping in the bush.