There are thousands of rock art sites throughout Australia with most of them in the north of Australia. Some of the petroglyphs are easier to find than others and this site near Alice Springs is one of the easiest to access. The Ewaninga Rock Carvings are located 39kms south of Alice Springs in a small reserve that protect the petroglyphs. These particular petroglyphs were made by the early Arrernte Aboriginal people of Central Australia. 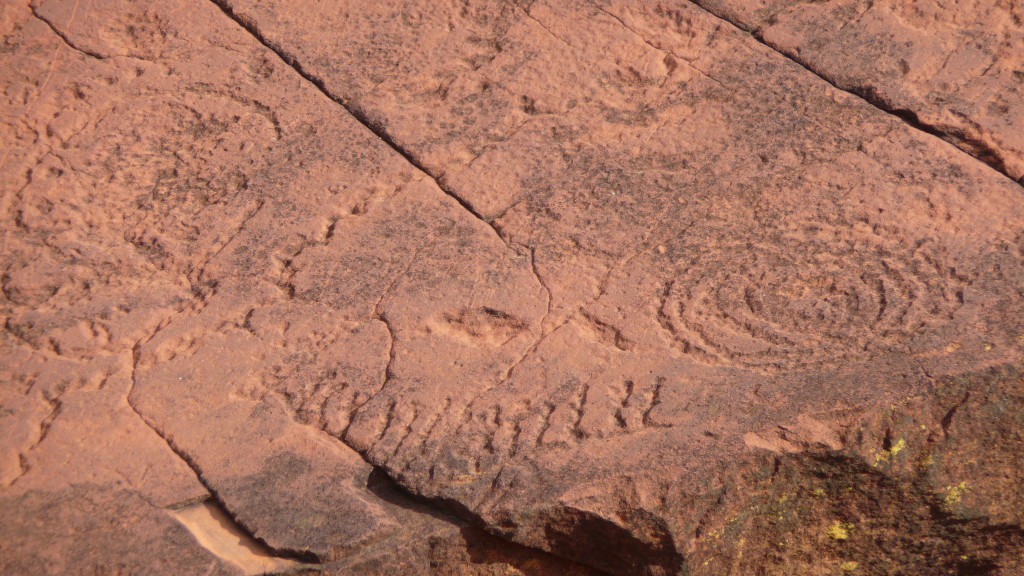 The Arrernte (pronounced Ah-runda) people are the original aboriginals of the area between Alice Springs, Wallace Rock Hole in the East, to the west to Kings Canyon and as far as Uluru in the south. They have been living in the Red Centre for 20,000 years and possibly as long as 40,000 years. 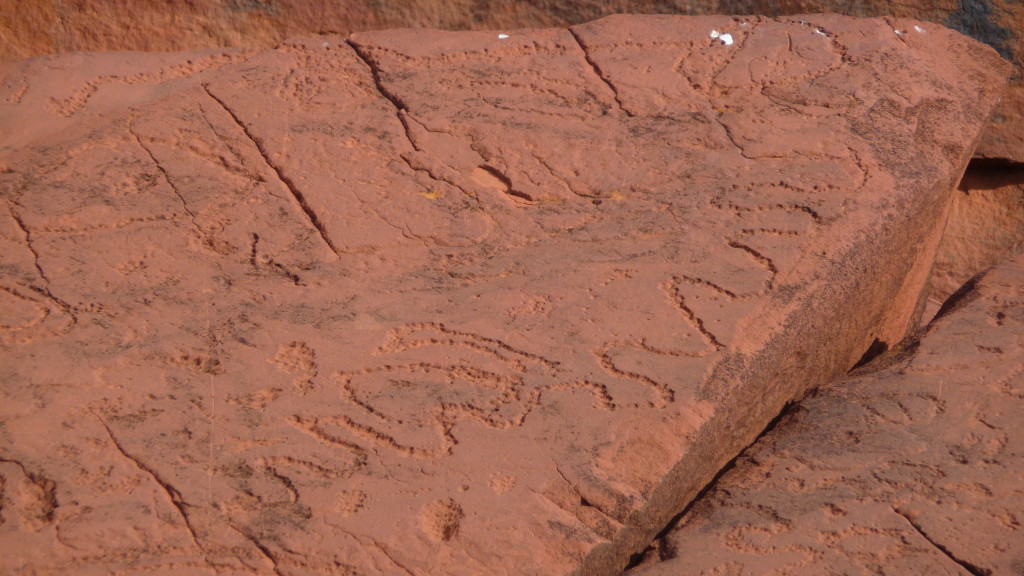 We had tried to view petroglyphs on a trip to the North West Coast of Tasmania however the local aboriginals had buried them under sand to protect them from vandalism or theft. It seamed that the Tasmanian Aboriginals and the local farmers didn’t see eye to eye about who could access the land in which the petroglyphs were located.
Fortunately the Ewaninga Rock Carvings are on display for everyone to view. At this location, outcrops of soft sandstone sit beside a claypan that holds water after rain that would have provided a good hunting ground for the local aboriginals when the fauna would come to drink from the waterhole.

The Ewanginga petroglyphs feature a variety of symbols and according to senior Arrernte Aboringals, the meanings are too dangerous to reveal to people who are not initiated into Aboriginal Law. Some believe that they are a kind of early map of the area. 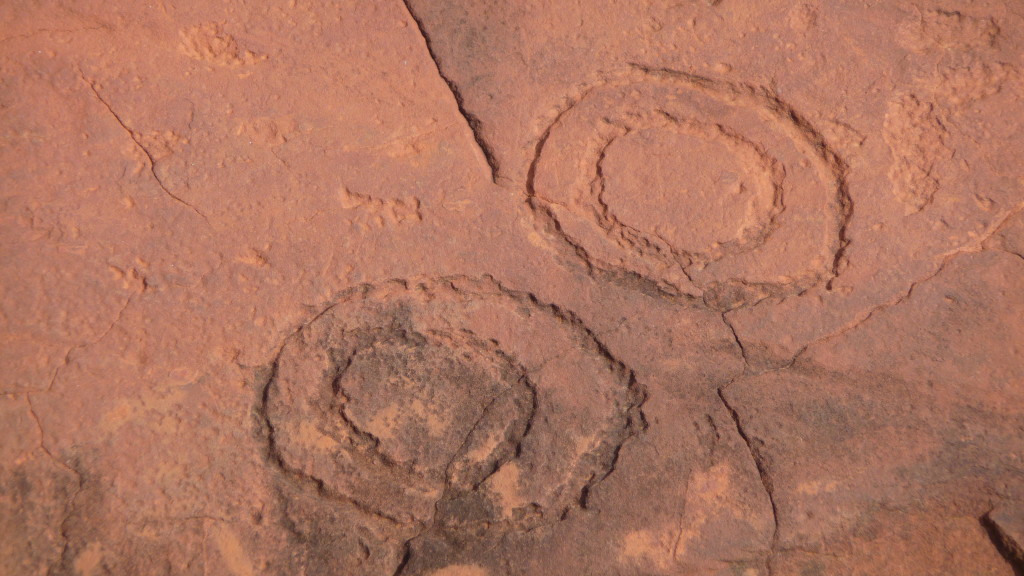 Trip Standard
Access to the Ewaninga Rock Carvings is via the unsealed Old South Road from Alice Springs. The road is suitable for conventional 2WD vehicles, however it can become impassable after rain. It’s possible for a camper trailer to be towed into the reserve however there’s not a lot of space in the parking bays at the reserve and more suitable to single vehicles.
Once at the reserve, there is a clearly marked walking track to follow and view the petroglyphs. Keep an eye out for dingo prints in the sand. 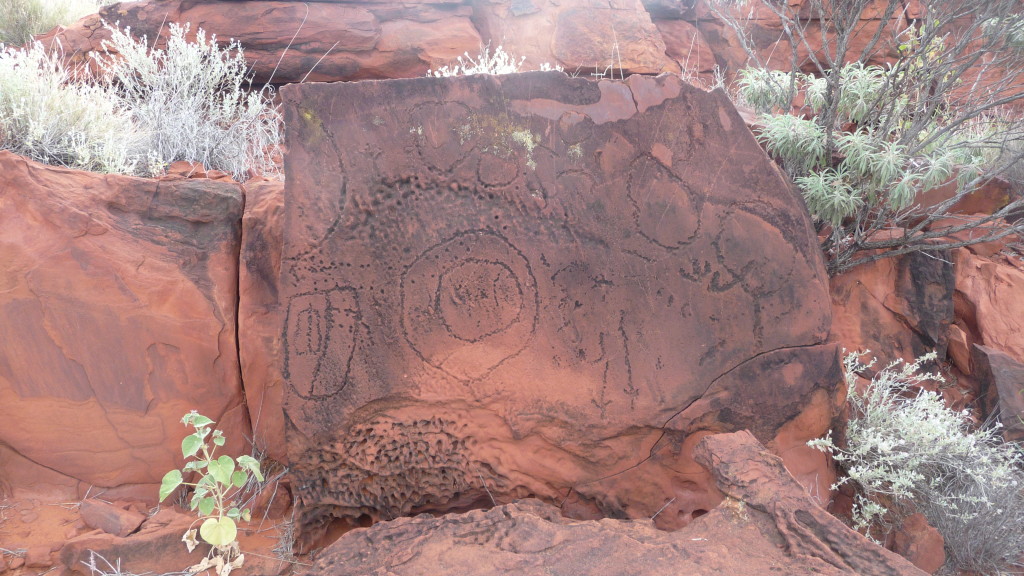 Best time to visit
The best time to visit is early morning or late afternoon when the shadows make the shallow engravings more obvious. Especially during summer, the temperatures are much cooler at this time of day.

A fact sheet from the NT Parks and Wildlife can be found here. This fact sheet contains a good map of the reserve. 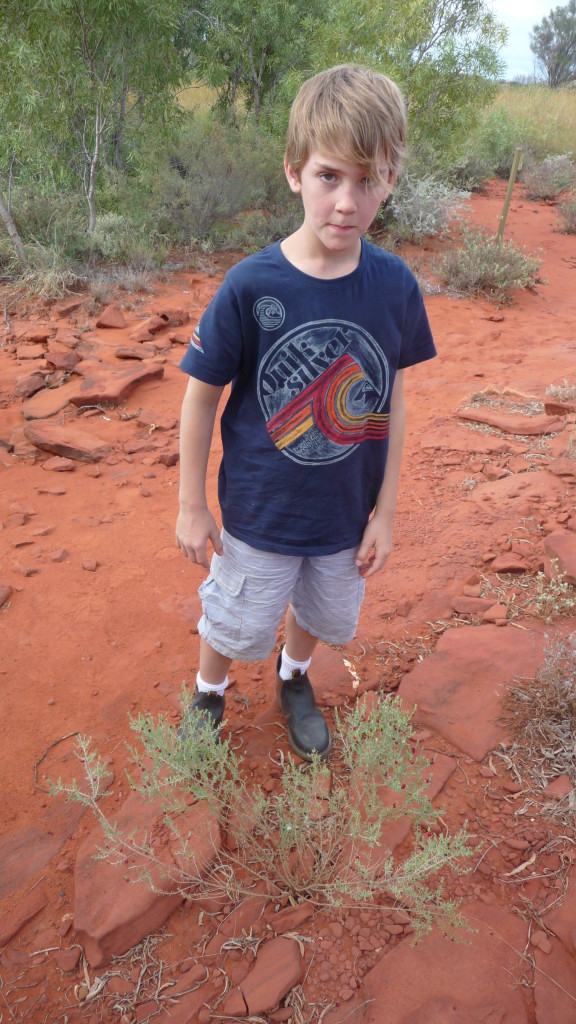 Fast facts
Don’t climb over the rocks, touch or interfere with the Ewaninga Rock Carvings as there aren’t a lot of these sites that are this accessible. Damage to the petroglyphs will see the site closed and only available to view by appointment or by an organized tour in the area.
The Arrernte Aboriginals prefer that Arrernte women don’t enter the Ewaninga site
Camping not allowed on the site or in the parking area
No pets allowed in the reserve
Pit toilets are available at the site 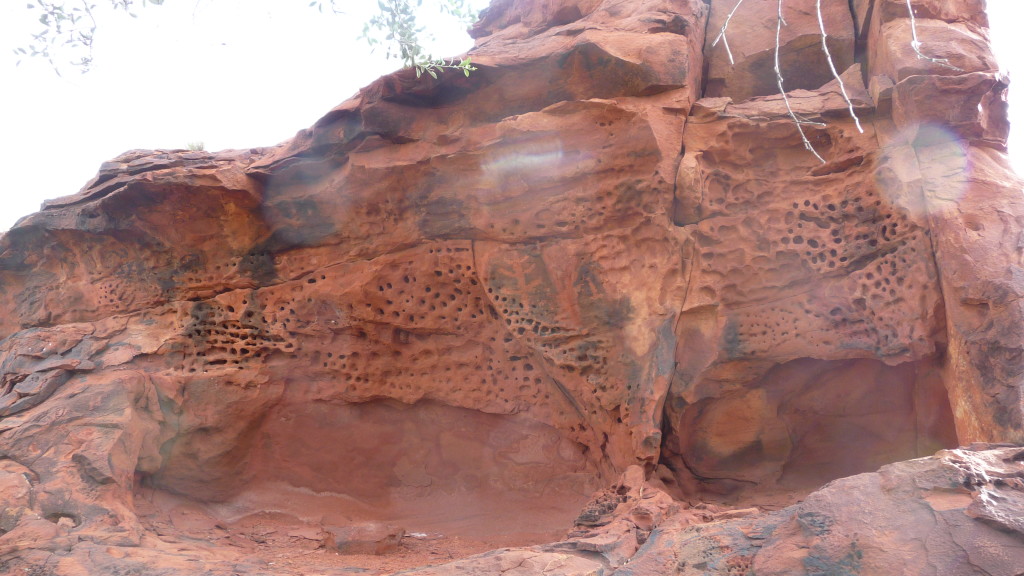