Kununurra is an agricultural and tourist town located at the extreme eastern edge of the Kimberley region. Most of its population is transitory, and during the dry season that population increases to around 10,000 people. The town itself doesn’t have the same appeal as Broome and is more of a base to resupply before or after driving through the Kimberley. 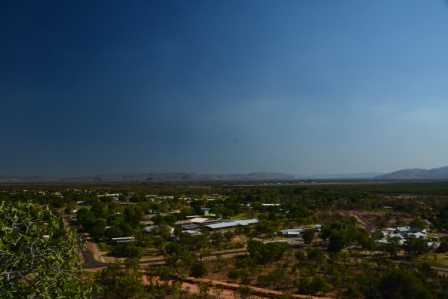 Kununurra is the gateway to the eastern Kimberley, which is very different from the western Kimberley. In the west, the terrain is mostly flat and sandy, whereas in the east, ranges and hills are carved by rivers to form spectacular gorges and waterfalls.
Kununurra means “big river” in the local Indigenous language. Kununurra is located by the Ord River, and the Ord River Dam which is not far away holds back Australia’s largest man-made lake. The River has freshwater crocodiles in it and plenty of catfish, in fact, go down near the old pumping station and throw some bread in the water. You will amazed at the number of the fish fighting for the bread. 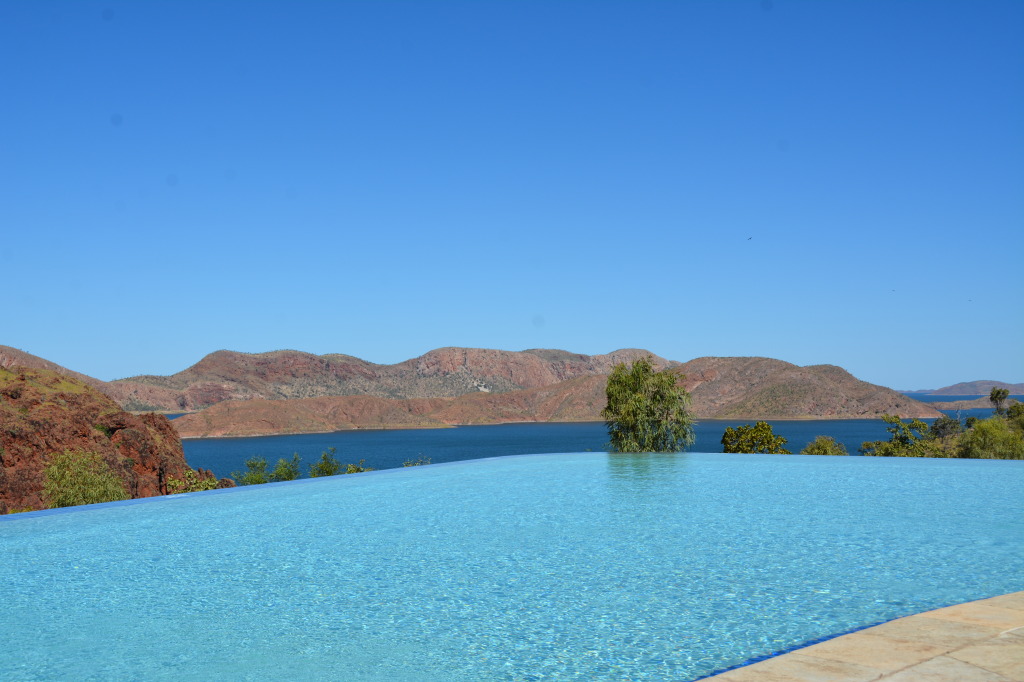 The history of Kununurra is tied up with the Ord River. Discussion about using the land for tropical agriculture had been happening since the 19th century, but it wasn’t until 1960 that the land that Kununurra was to be built upon was resumed from Ivanhoe Station.
The idea of the scheme was that farmers could have the convenience of living in a town, with easy access to their irrigation farms. 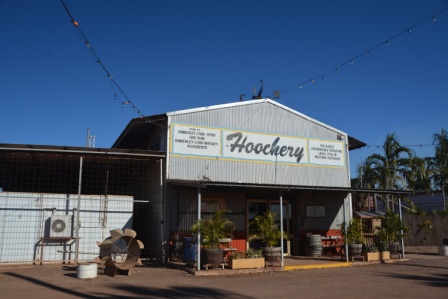 In 1968, the second stage of the scheme commenced with the construction of the Ord River Dam, which holds back the waters of Lake Argyle. By this stage, there were 31 farms on the plains of the Ord River.
The construction of this dam has enabled the irrigation of about 750 km of land. The scheme is still ongoing, with the main channel being extended. 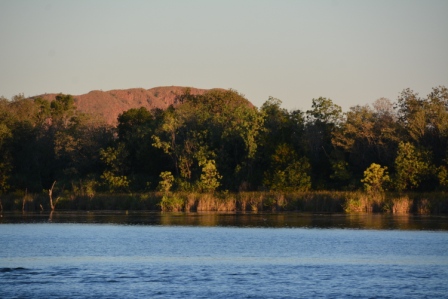 There have been a few failed attempts of crops growing in the irrigation area around Kununurra. First the cotton growers were heavily impacted by a caterpillar that basically destroyed their crops and the cost of removing the caterpillars made cotton growing not commercially viable.
The farmers then tried their hand in rice which seemed like a great idea being so close to Asia. Unfortunately, so did the magpie geese that flew in and had a great old feed on the rice. In fact, it was estimated that they were eating up to 1.5 tonnes a day!
These days, there are huge amounts of Sandalwood plantations around Kununurra that export into the Asian markets. 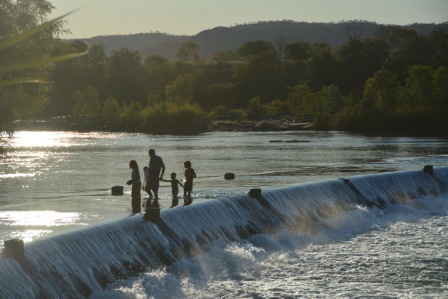 From Darwin, take the National Highway 1 west. From Perth, the capital, take the National Highway 95 north, and then take the Great Northern Highway east. To say the least it’s a fair drive to get to Kununurra and I guess that’s one of the appeals to the place.
During the dry season, there are offroad vehicles and caravans everywhere. Go past the local mechanic shops like ARB and there will be up to half a dozen cars parked out the front waiting to be repaired. The cause – the Gibb River Road!

As with most towns in the Kimberley, Kununurra is difficult to get to. Not because of any particular obstacle, but simply the distances involved. From Darwin, it is 830 km. From Perth, the capital city, it’s a whopping 3,200 km. It is possible to fly in, as the area is serviced by two small aerodromes, but commercial flights are rather expensive because it’s not a major city.

The best time to visit is during the dry season, from April to September approximately. During this period, the maximum daytime temperature usually hovers around 30 degrees. During the wet season, the temperature rises to 35 degrees, and humidity soars to near 100%. 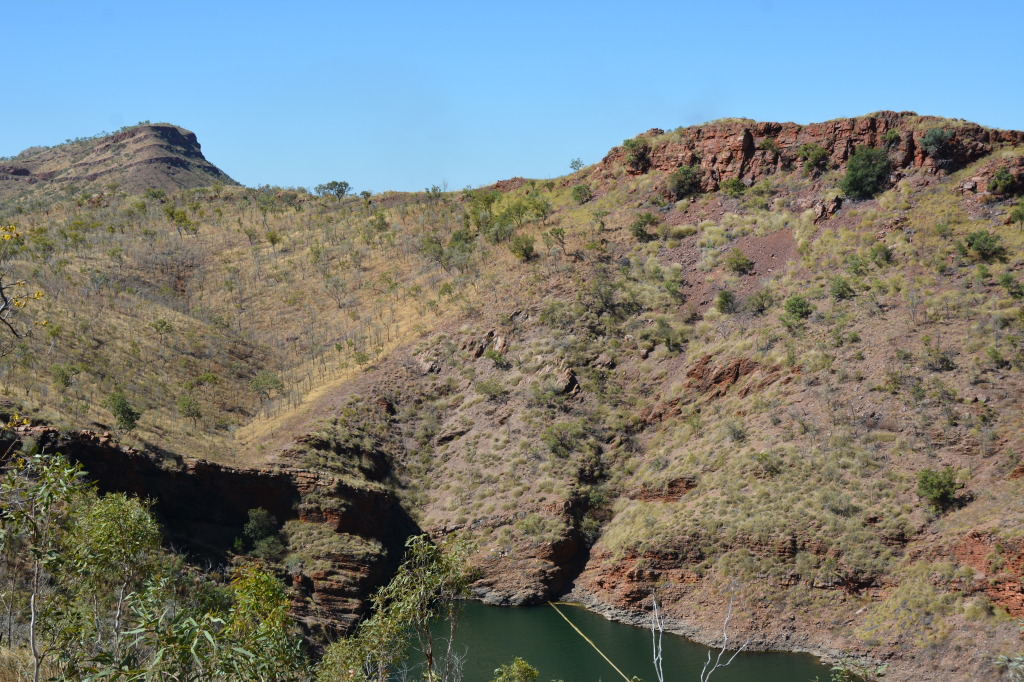 Kununurra is located near excellent gorges which have swimming opportunities. To take maximum advantage, make sure you visit soon after the wet season, so all the watercourses haven’t began to dry out yet, and their full effect is realised. Importantly, check with the local tourism office for the swimming holes without Saltwater Crocs in them!

There are several caravan parks and small resorts in town, so take your pick. There are also many places where you can free camp along the banks of the Ord River, or on the road in. Take all the usual precautions when free camping. 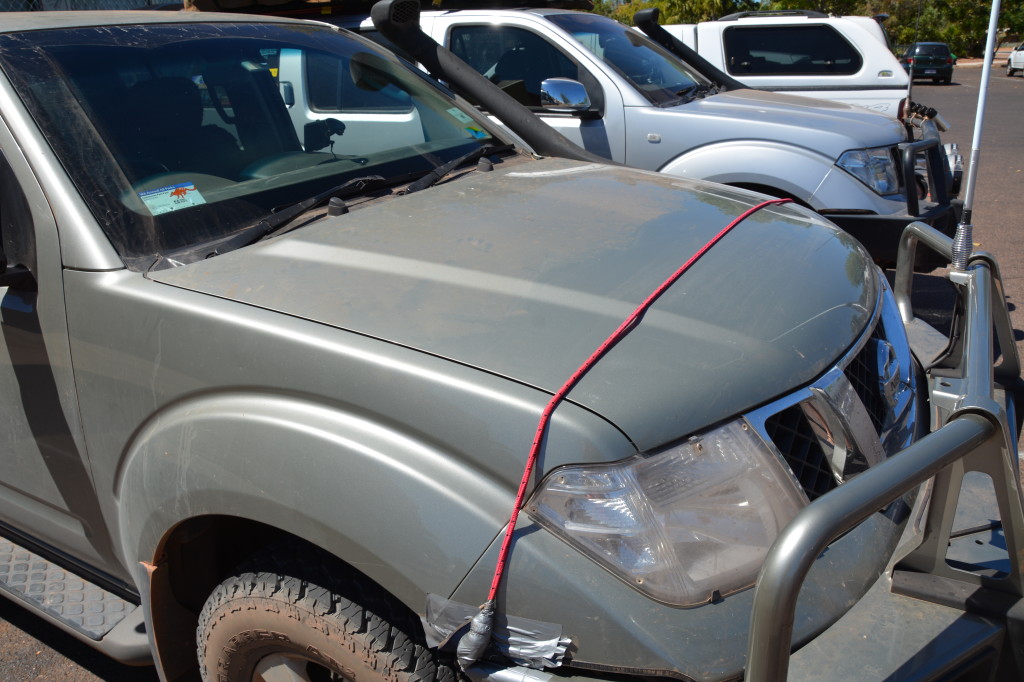 Another Pathfinder’s bonnet broken and attached by an occy strap, Kimberley

We stayed at the local showground, where we were provided with power and water. The fees were cheaper than the local caravan parks, and the caretaker was nice enough to let us leave the Jayco Expanda there while we went to the Bungle Bungles.

The water in Kununurra has a very high mineral content and quite a few locals prefer to drink bottled water. We were more than happy to drink the towns water while we stayed for a week. I think there was more beer consumed than water anyway. 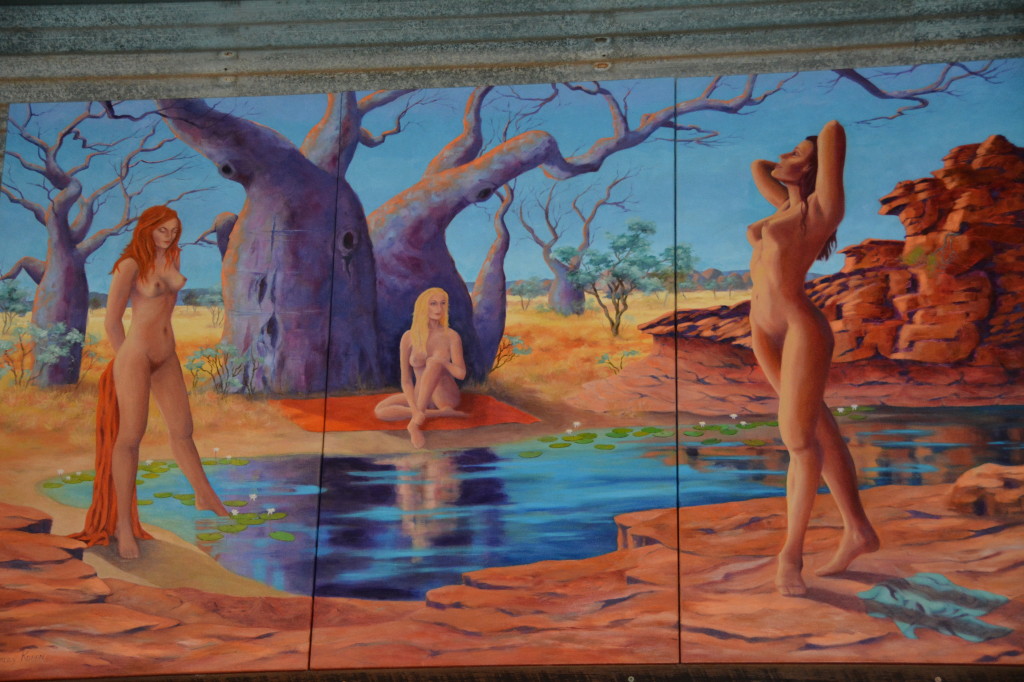 The water is not so bad compared to other areas along the West Coast. There are also two main water pipes that service the town, one for drinking and one for irrigation. You will notice that certain areas like the sports ground and parks are green throughout the year. This is due to the unlimited water supply from the Ord Dam.
The locals will more than likely try to sell you a decorated Boab Nut for anything between $15 and $30. It gives them a bit of spending money. Our boys were finding the nuts and scratching patterns into the nuts which they kept. They did try to sell a couple of them for $10 each to our friends that we met in Litchfield. 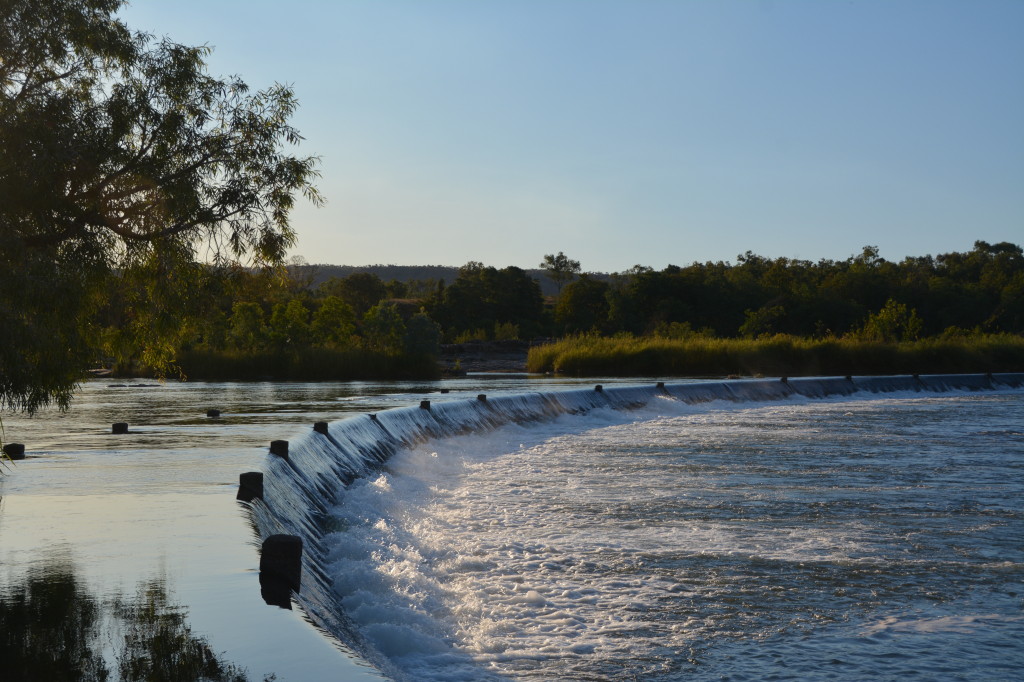 It’s a pretty good atmosphere in Kununurra during the dry season. Nearly everyone visiting the town are either about to do the Gibb River Road or have just done it. It’s usually pretty easy to tell the difference with one full of anticipation and a little nervous and the other relieved yet satisfied that they had driven it relatively unscathed.
There are of course the others who weren’t really prepared and did the GRR anyway, usually with a repair bill that helped the economy of Kununurra. 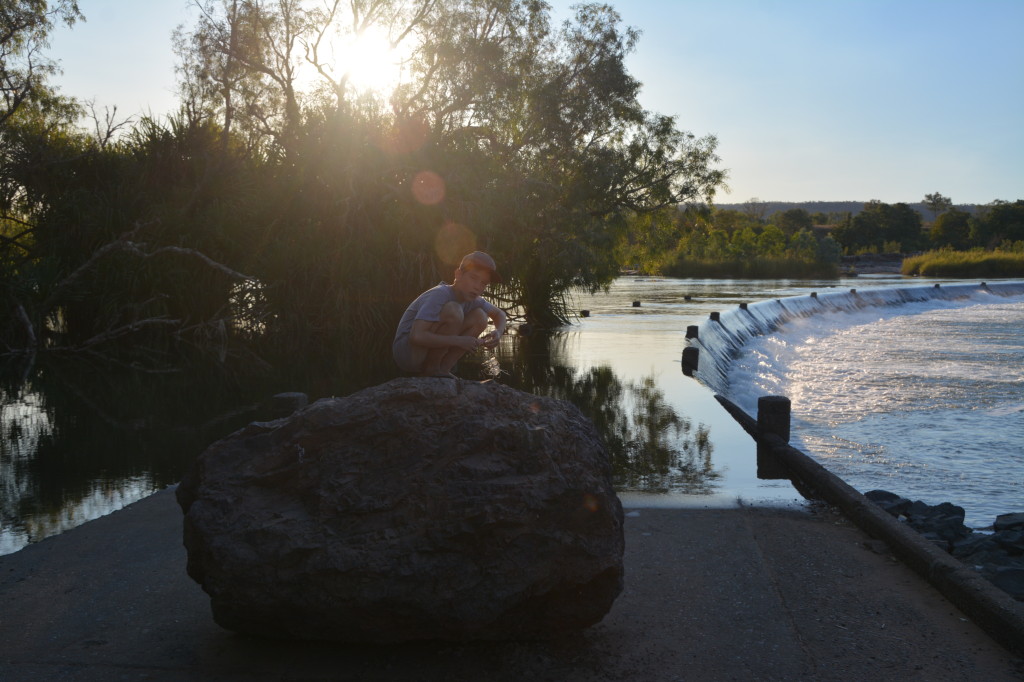 What we liked about Kununurra

We like the great camping at the sports ground. Even if the sign says that it’s full, go in and speak to the caretaker because if you are tight on budget or have a family, they more than likely will let you stay.
The community spirit is pretty high is Kununurra which was on display at the local schools sports day in front of us at the sports oval. There were hundreds of kids running around from 3pm to 7pm with their parents turning up to watch after work. We couldn’t go past their sausage sizzle.

What we disliked about Kununurra

Most of the shops are boarded up with iron bars and corrugated iron sheets for obvious reasons you will realise when you visit. The campground’s caretaker had a couple of dogs that barked if anyone was walking around in the evening. 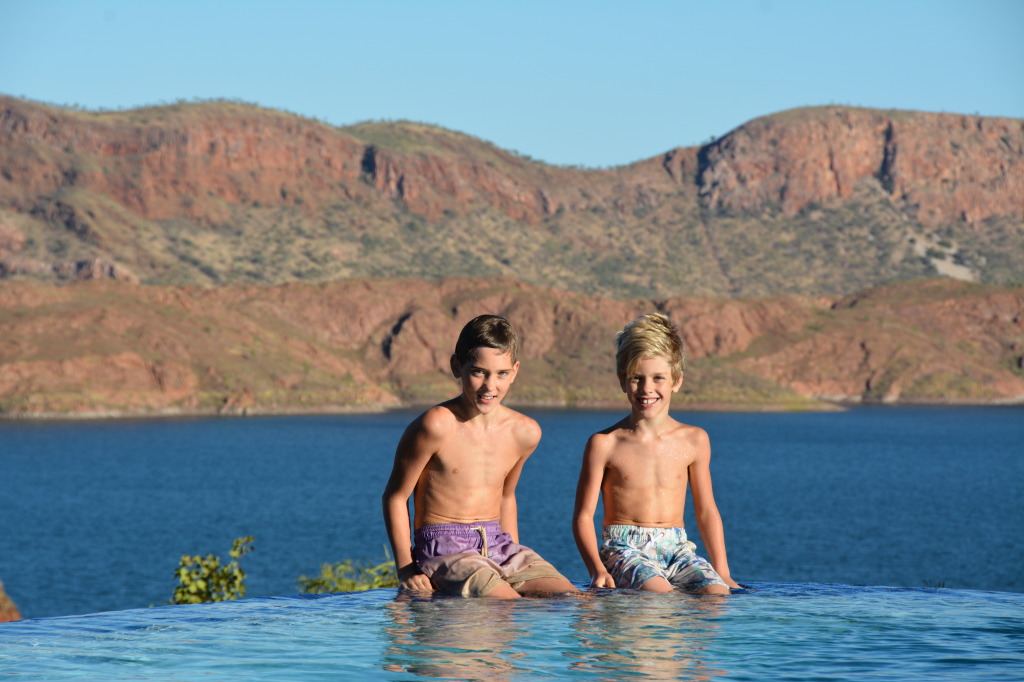 What the kids liked about Kununurra

The boys loved camping at the sports oval. Each day they were feeding the whistling kites on the oval with about a dozen of them flying in and catching pieces of food.
They also enjoyed finding the boab nuts and decorating them.

What the kids disliked about Kununurra

They were missing school at Kununurra and the friends they hadn’t seen for a while. They were sitting on the oval’s fence itching to get on and participate in the sports events.