Broome is a coastal town in Western Australia’s north, on the southern edge of the Kimberley region. It is a major tourist destination, and is also famous for its pearling industry. The permanent population is around 15,000, with numbers swelling to about 45,000 over the summer period. 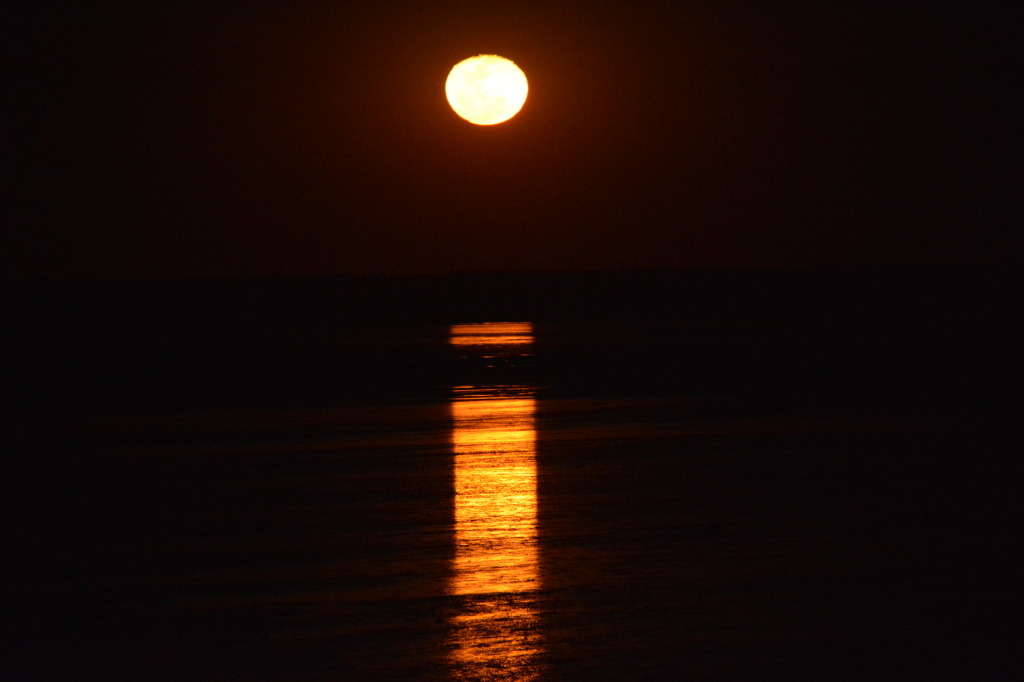 Staircase to the moon, Broome

A major attraction is Cable Beach, where in 1889 an undersea telegraph cable was laid from Broome to Singapore, which in turn was connected to England. This facilitated quicker communication between the colony and its government in England.
Today, Cable Beach is popular with swimmers and other recreational beach goers. It is also home to one of Australia’s most famous nudist beaches. Everything north of the carpark is clothing optional. There seemed to be quite a few people with all over tans getting around in Broome. 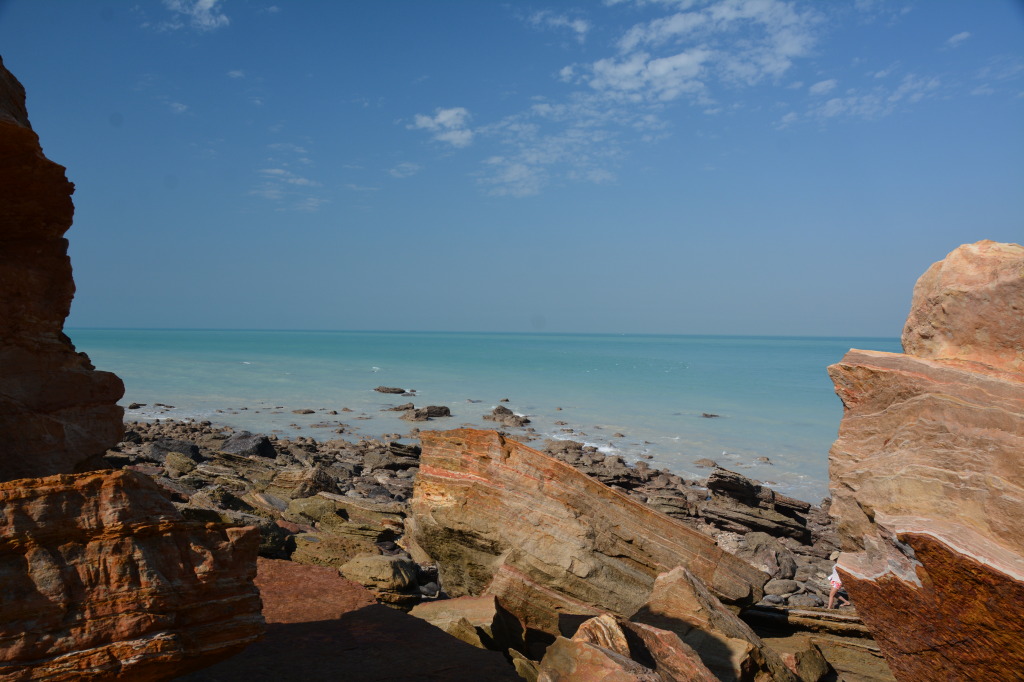 One other attraction is Roebuck Bay, where huge tides form some of the largest and most biodiverse coastal mudflats in the world. These flats are a stopover point for migratory birds on their way to and from their breeding grounds in Asia.
Roebuck Bay is also home to fossilised dinosaur footprints. Some of these footprints, made by a sauropod dinosaur, are up to 1.7m in diameter. These dimensions would make the animal 7-8m high at the hip. There are also the footprints of theropod dinosaurs. 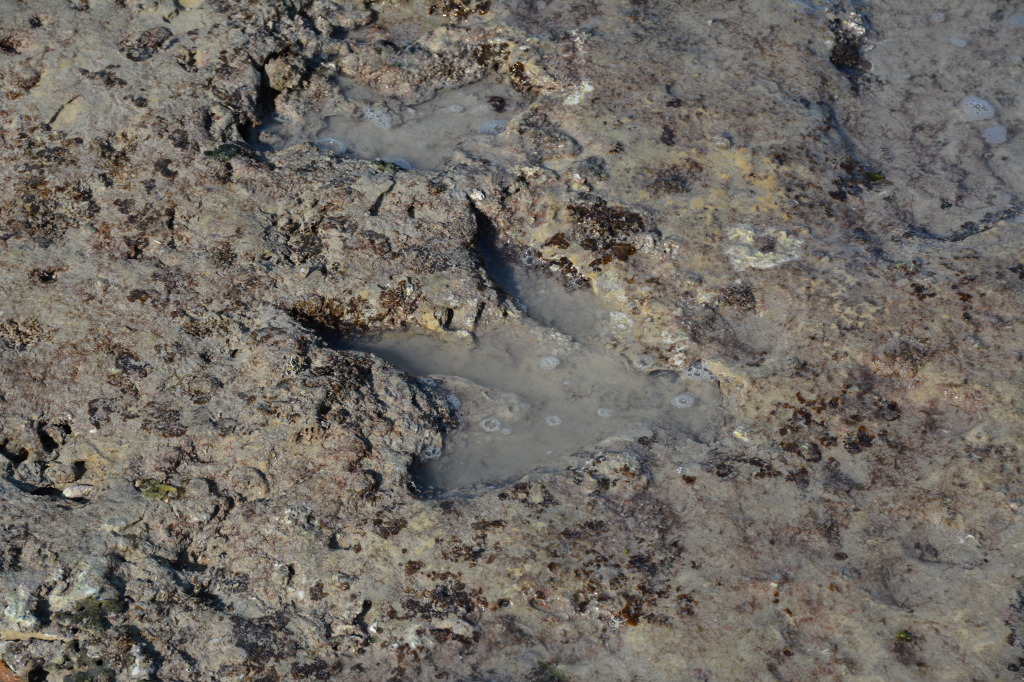 Most history of towns and regions are a little dull however Broome is one of those places that oozes in interesting history. Broome was founded in 1883, and named after the Premier of Western Australia at the time. Roebuck Bay was chosen as its site, due to its proximity to the nearby oyster beds.
Broome was founded as a pearling town. Indigenous people were enslaved, and forced to free dive to the ocean floor and harvest the oysters. Pregnant women were often chosen for this task, as it was thought that their pregnancy allowed them to hold their breath longer. Seriously! 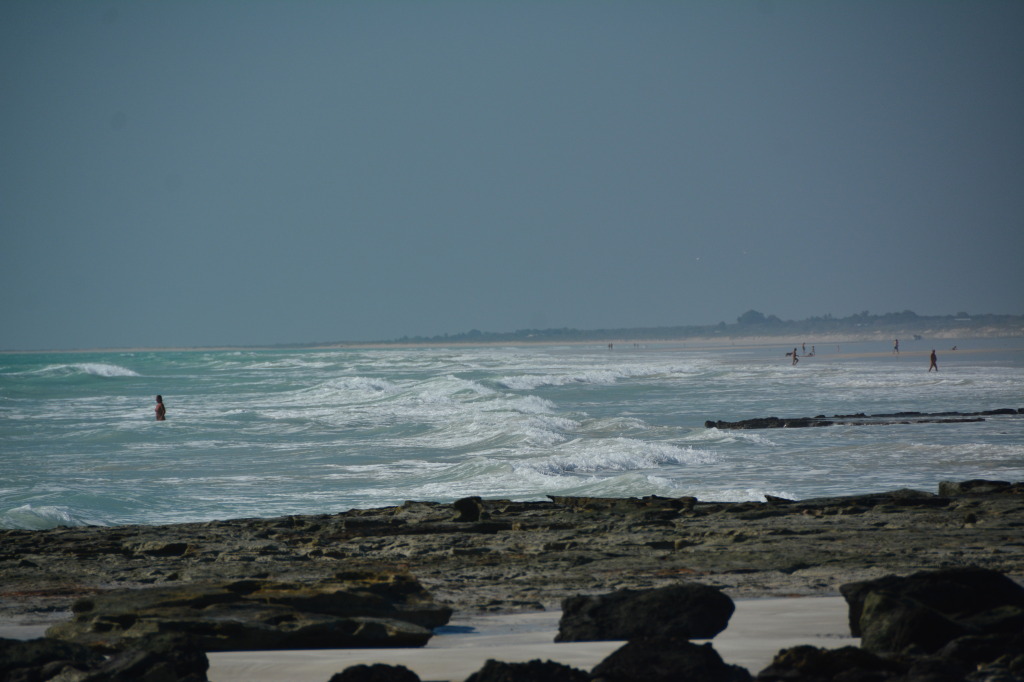 After slavery was abolished, Asian migrants, particularly the Japanese, began to flock to Broome to fill the labour void left behind. These people were already skilled in pearling, and had a heavy influence on the culture of the town. This multicultural history is celebrated each year in the form of the Shinju Matsuri, or Festival of the Pearl.

Today, pearling is still a major industry in Broome. However, the oysters are usually harvested from farms, rather than from wild populations. 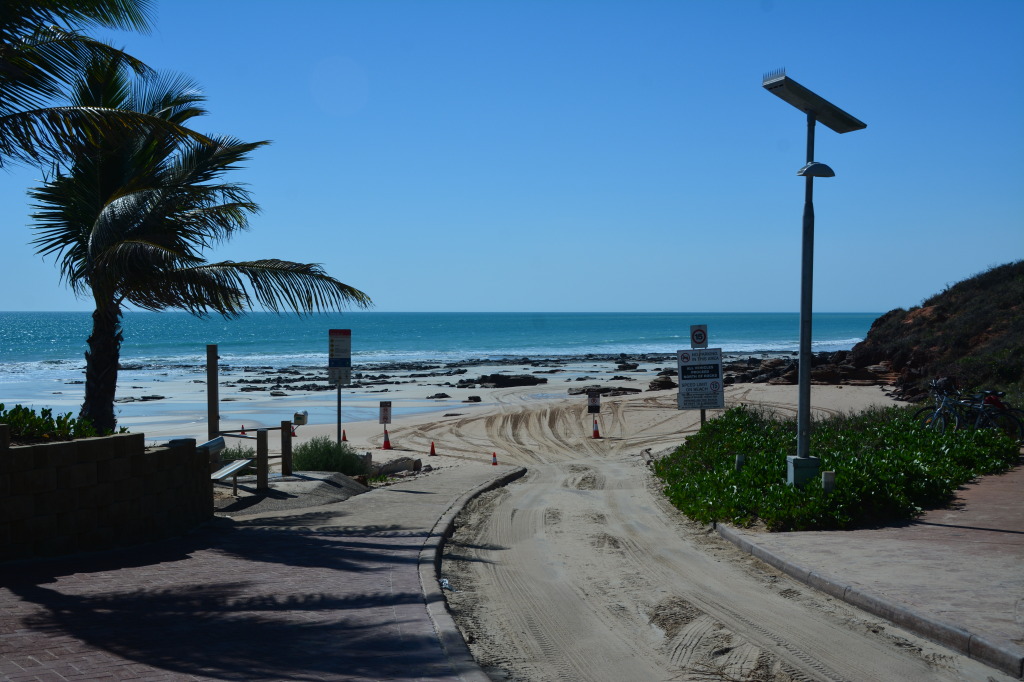 The main difficulty when getting to Broome is the immense distances involved. It is 1,800km to Broome from Darwin by car. From Perth, it’s 2,200. By far the easiest way to reach Broome is by flying, if you don’t mind the extra expense.
The road into Broome is all bitumen so there is no issue towing an on road van into the town.

The best time to visit is during the dry season, from April to September approximately. During this period, the maximum daytime temperature usually hovers around 30 degrees, and the beaches are also safe for swimming. During the wet season, the temperature rises to 35 degrees, and humidity soars to near 100%. The wet season is also the time when lethal box jellyfish move inshore to breed, so you can’t cool off with a dip in the ocean.

The downside to coming to Broome during the dry season is that it’s packed with tourists, especially during July/August/September. If you can, try to arrive early or late in the Dry Season, when you’ll get all the benefits but hopefully less tourists.
More information on Broome can be found here.

Broome is home to many caravan parks and resorts that cater to the hordes of tourists that arrive each year, including Cable Beach Caravan Park and Roebuck Bay Caravan Park. If you want a spot, make sure you book early, otherwise you run the risk of missing out.
People travel to Broome year after year and even get the same spot in the Caravan Parks. 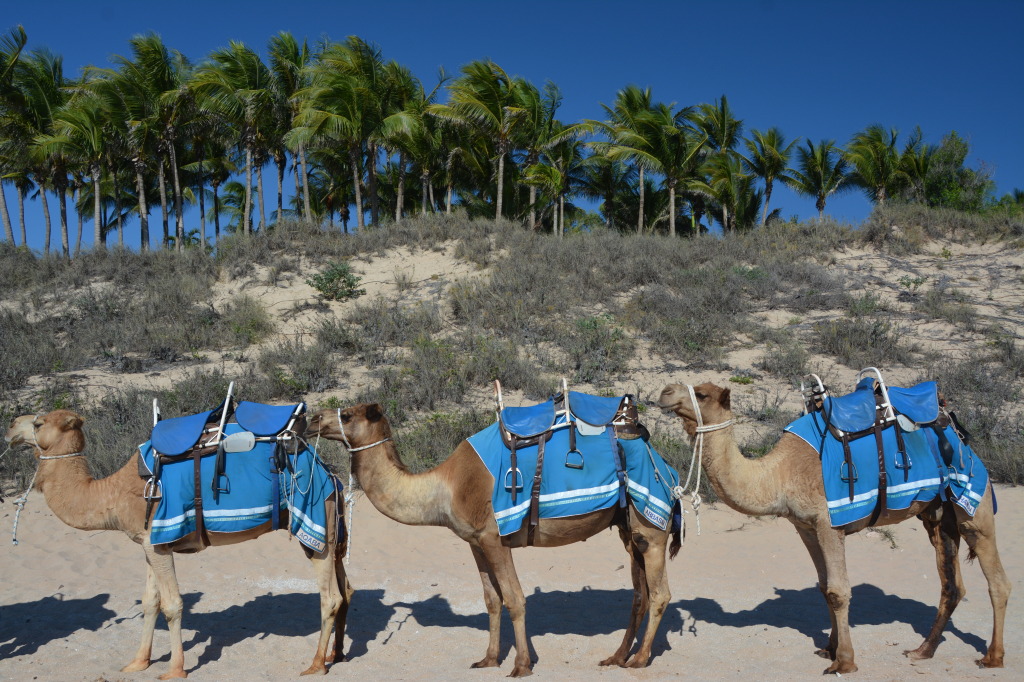 Although the Broome Shire doesn’t encourage it, there are also free camping options nearby, such as at Willie Creek, Barred Creek, James Price Point and Quondong Point. The trouble is that they are a fair way out of town and along a very rough road. Not suitable to be driving in and out each day.

If you have a 4×4, then get down on the beach at low tide. Watch out for the Nudies though if you’re travelling along north of Cable Beach. There are plenty of brown bottoms along the beach as you drive down to find a piece of sand for yourself – clothing optional!

There is a great atmosphere in Broome during the dry season as everyone, except the locals are on holidays. There are markets on all the time and a few festivals thrown in the mix. The fireworks for the Festival of the Pearl are not to be missed at Cable Beach. The community put music on, a market and of course the fireworks that go for approx. 15 minutes. Amazing.
Plan your visit to Broome around the Staircase to the moon. You and a few hundred people will be watching with you but it’s a beautiful spectacle. 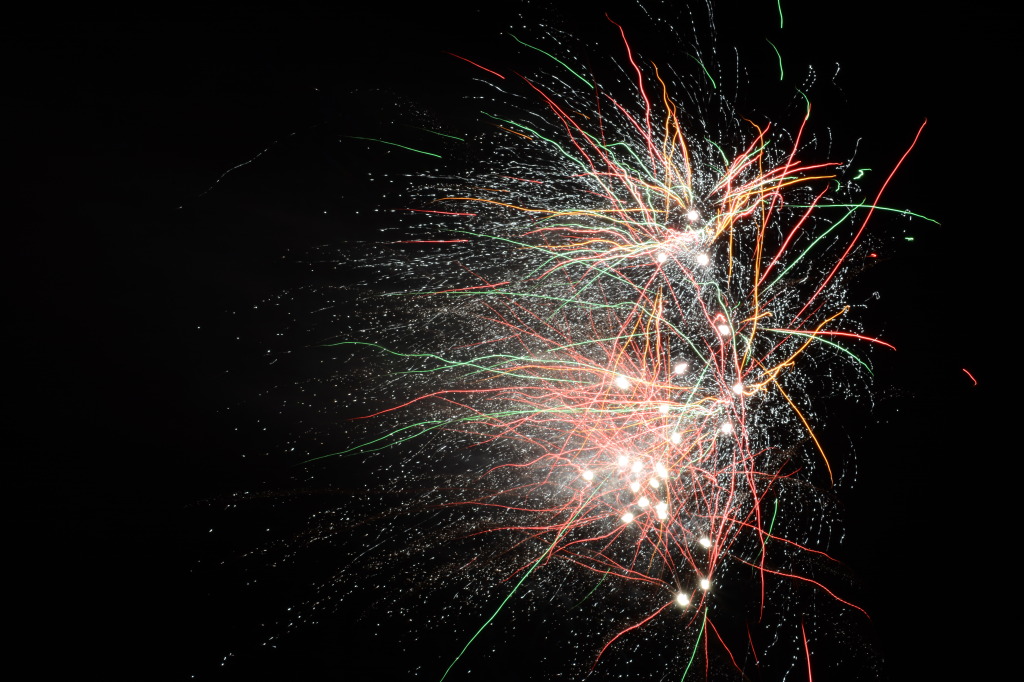 Festival of the Pearl fireworks, Broome

After spending 4 weeks in the Kimberley dirt, the best thing we loved about Broome was the lush green grass at Cable Beach. As soon as we pulled up at the car park, the kids were running around and rolling on the grass. It must have looked funny to the locals but I’m sure they are used to it. 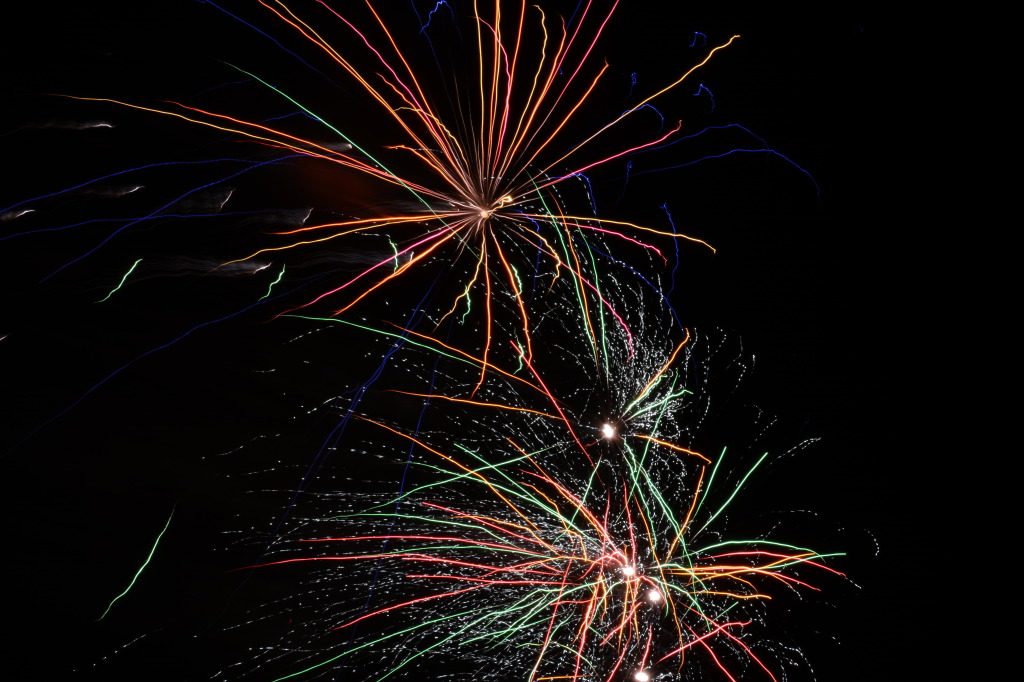 Festival of the Pearl fireworks, Broome

Feeling grass under our bare feet after travelling through the dry dusty Kimberley. It was refreshing to get away from the dust for a while! The atmosphere around Broome and not paying the high prices of groceries and beer from the roadhouses in the Kimberley.

What we disliked about it

The roads around the town are a bit strange. You will see what we mean once you get there. Or perhaps it was just me after driving for weeks in the Kimberley! You be the judge.

Not really a dislike but it was sad to see the end of the Kimberley. Its such an amazing place to visit and driving into Broome is like saying goodbye to the rugged and remote Kimberley.

The kids really liked going to Cable Beach for the Camel ride. They also liked hanging out with the other kids at the caravan park since they hadn’t really seen any in the Kimberley.
They loved finding the dinosaur footprints in the sandstone. 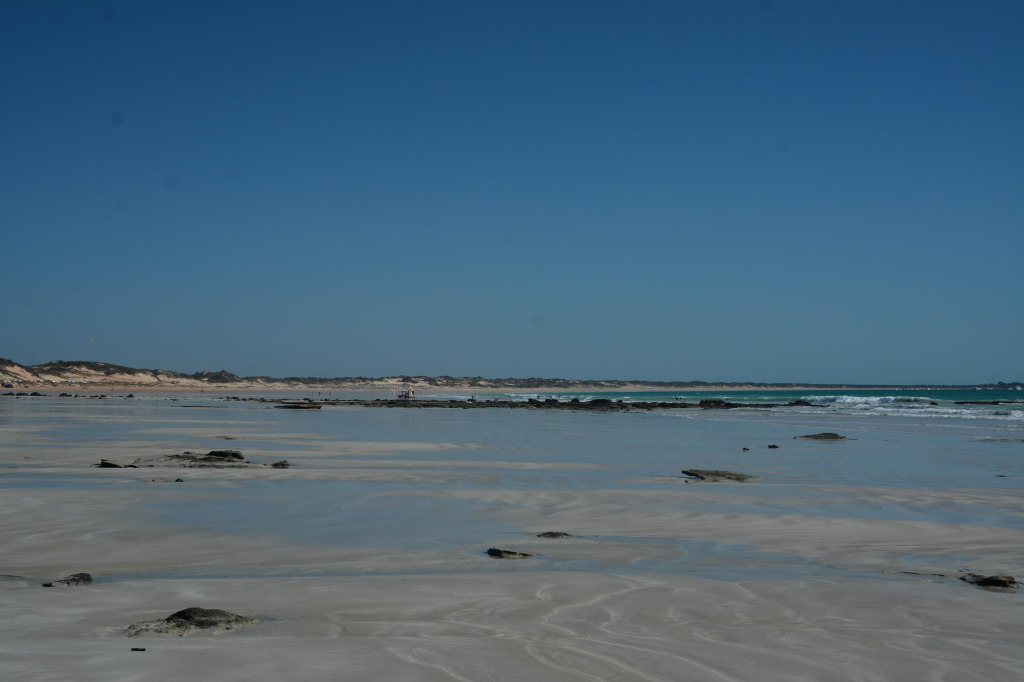 What the kids disliked about it

There was no jumping pillow at the caravan park we stayed in the waves weren’t big enough at Cable Beach. They weren’t impressed that the nude beach was where the camel rides were either. They were a bit reluctant as they weren’t keen on seeing any oldies naked down the beach!
Fortunately for them they didnt see any brown bottoms during their camel ride.

Broome is one of those special places that must be on the to visit list when traveling around Australia.